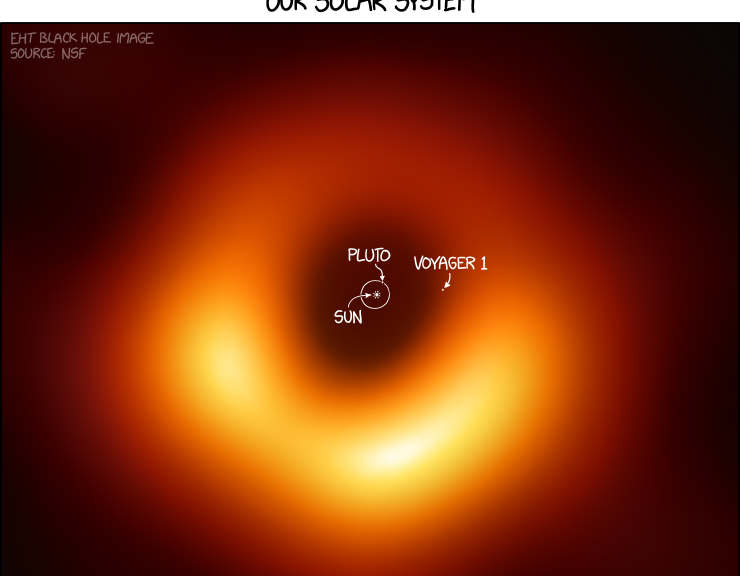 Well, astronomers finally did it. Nearly 100 years ago, Albert Einstein’s theory of General Relativity predicted that black holes should exist. Although it took until the 1960’s for someone like physicist John Wheeler to coin the name ‘black hole’ the study of these enigmatic objects became a cottage industry in theoretical physics and astrophysics. In fact, for certain kinds of astronomical phenomena such as quasars and x-ray sources, there was simply no other explanation for how such phenomena could generate so much energy in such an impossibly small volume of space. The existence of black holes was elevated to a certainty during the 1990s as studies of distant galaxies by the Hubble Space Telescope turned in tons of data that clinched the idea that the cores of most if not all galaxies had them. In fact, these black holes contained millions or even billions of times the mass of our sun and were awarded a moniker all their own: supermassive black holes. But there was still one outstanding problem for these versatile engines of gravitational destruction: Not a single one had ever been seen. To understand why, we have to delve rather deeply into what these beasties really are. Hang on to your seats!

General relativity is the preeminent theory of gravity, but it is completely couched in the language of geometry – in this case the geometry of what is called our 4-dimensional spacetime continuum. You see, in general relativity, what we call space is just a particular feature of the gravitational field of the cosmos within which we are embedded rather seamlessly. This is all well and good, and this perspective has led to the amazing development of the cosmological model called Big Bang theory. Despite this amazing success, it is a theory not without its problems. The problems stem from what happens when you collect enough mass together in a small volume of space so that the geometry of spacetime (e.g. the strength of gravity) becomes enormously curved.

The very first thing that happens according to the theory is that a condition in spacetime called a Singularity forms. Here, general relativity itself falls apart because density and gravity tend towards infinite conditions. Amazingly according to general relativity, and proved by the late Stephen Hawkins, spacetime immediately develops a zone surrounding the Singularity called an event horizon. For black holes more massive than our sun, the distance in kilometers of this spherical horizon from the Singularity is just 2.9 times the mass of the black hole in multiples of the sun’s mass. For example, if the mass of a supermassive black hole is 6.5 billion times the mass of our sun, its event horizon is at 6.5 billionx2.9 or 19 billion kilometers. Our solar system has a radius of only 8 billion km to Pluto, so this supermassive black hole is over twice the size of our solar system!

Now the problem with event horizons is that they are one-way. Objects and even light can travel through them from outside the black hole, but once inside they can never return to the outside universe to give a description of what happened. However, it is a misunderstanding to say that black holes ‘suck’ as the modern colloquialism goes. They are simply points of intense gravitational force, and if our sun were replaced by one very gently, our Earth would not even register the event and continue its merry way in its orbit. The astrophysicist’s frustration is that it has never been possible to take a look at what is going on around the event horizon…until April 10, 2019.

Researchers using the radio telescope interferometer system called the Event Horizon Telescope were able to synthesize an image of the surroundings of the supermassive black hole in the quasar-like galaxy Messier-87 – also known as Virgo A by early radio astronomers after World War II, and located about 55 million light years from Earth. They combined the data from eight radio telescopes scattered from Antarctica to the UK to create one telescope with the effective diameter of the entire Earth. With this, they were able to detect and resolve details at the center of M-87 near the location of a presumed supermassive black hole. This black hole is surrounded by a swirling disk of magnetized matter, which ejects a powerful beam of plasma into intergalactic space. It has been intensively studied for decades and the details of this process always point to a supermassive black hole as the cause.

Beginning in 2016, several petabytes of data were gathered from the Event Horizon Telescope and a massive press conference was convened to announce the first images of the vicinity of the event horizon. Surrounding the black shadow zone containing the event horizon was a clockwise-rotating ring of billion-degree plasma traveling at nearly the speed of light. When the details of this image were compared with supercomputer simulations, the mass of the supermassive black hole could be accurately determined as well as the dynamics of the ring plasma. The round shape of the event horizon was not perfect, which means that it is a rotating Kerr-type black hole. The darkness of the zone indicated that the event horizon did not have a photosphere of hot matter like the surface of our sun, so many competing ideas about this mass could be eliminated. Only the blackness of a black hole and its compact size now remain as the most consistent explanation for what we are ‘seeing’. Over time, astronomers will watch as this ring plasma moves from week to week. The next target for the Event Horizon Telescope is the four million solar mass black hole at the center of the Milky Way called Sgr-A*. Watch this space for more details to come!!

We have truly entered a new world in exploring our universe. Now if someone could only do something about dark matter!!!