In nine weeks, on August 17, 2017, residents of the continental United States will be treated to a total solar eclipse as they enjoy their noon-time repast. If you are standing along the line of totality, which stretches from Oregon’s Pacific coast to South Carolina’s Atlantic surf, and if you have a good telescope, you may even be treated to a view such as the one below photographed by Luc Viatour ( www.Lucnix.be) during the August 1999 total solar eclipse over France! 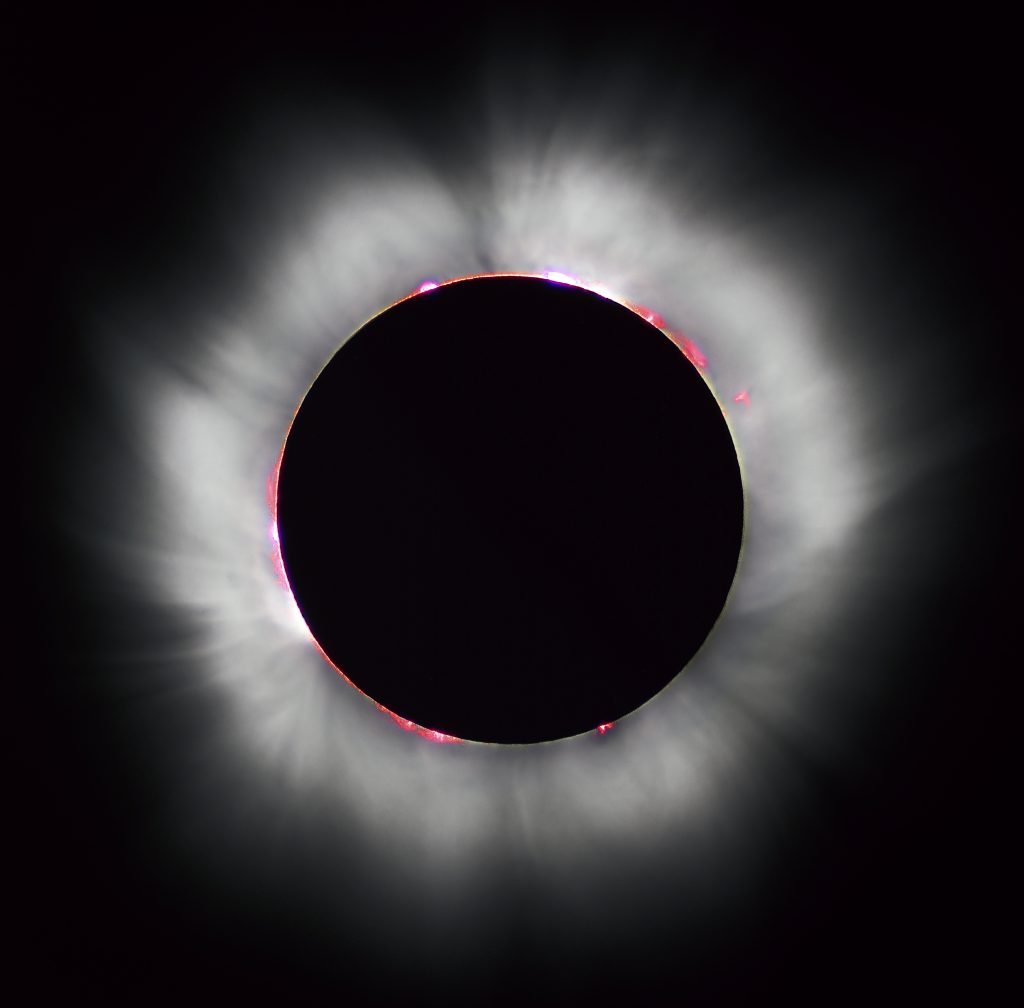 In this blog, I am going to mention some of the work I am doing to help the public enjoy this once-in-a-lifetime event through my various projects at NASA. NASA, as part of its informal education programs, has adopted this event as a major national PR effort to focus its many assets on the ground and in space. In early-2016, my group at the NASA Goddard Spaceflight Center called the Heliophysics Education Consortium (HEC) was asked to lead the charge organize this event. Led by Dr. Alex Young, the HEC team has created the Official Eclipse website, and I have had the great pleasure and honor to have written many of its resources. So, think of this Blog as an introduction to the What, Where, When and How of this eclipse, and a personal tour by me for how you can enjoy this rare and magnificent event!

First, you probably have a lot of questions about solar eclipses, so I wrote a FAQ Page that covers most of the common ones. I also wrote an essay about the many Eclipse Misconceptions that people have had about solar eclipses. Some are quite bizarre, but seem to be passed on from generation to generation despite our deep scientific understanding of them!

Take a look at the picture at the top of this blog. During most total eclipses of the sun, you are guaranteed to see the brilliant solar corona. With a telescope or a good telephoto lens, you may even glimpse the reddish hue of the solar chromosphere following along the darkened limb of the moon. Here and there, you may even see a solar prominence also glowing in reddish light. These features are hard to see because they are rather small and with the naked eye you just don’t have the natural magnification to see them well.

I will be writing a number of  essays that discuss particular aspects of the sun and post them at the Eclipse SCIENCE page. Topics will include the corona, prominences, chromosphere and the dramatic helmet streamers  so far as astronomers understand them today. It’s all about solar magnetism and how this interacts with the 100,000 degree plasma in the solar atmosphere. The corona, itself, has a temperature of several million degrees! It is about a million times fainter than the disk of the sun, which is why you only get to see it during an eclipse. But astronomers can use instruments called coronagraphs to artificially eclipse the sun, and allow us to study coronal features at our leisure.

There are many things you can do while waiting for the eclipse to start, and a few non-invasive things you can do while the eclipse is in progress. I have tried to collect these ideas into two areas called Citizen Explorers and Citizen Scientists depending on how serious you want to be in exploring eclipses. If you have a mathematical mind, I have even created a dozen or so curious Math Challenges that help you look at many different aspects of the event.

Just about everyone is going to want to use their smartphones to photograph the eclipse, so in my article on Smartphone Photography I try to outline some of the things you can do, what kinds of technology you need like inexpensive telephoto lenses, and what to expect. Below is a photo taken by a smartphone with no other technology from Longyearbyen, Svalbard in 2015. Your camera phone will give you a brilliant, over-exposed corona but don’t expect detailed resolution because your lens is simply not good enough to show details like those in the photo above. If you use an inexpensive smartphone telephoto with 15x or higher, you need a camera tripod too. Also, be careful that you do not use the telephoto on the sun while the brilliant photosphere is visible to avoid camera damage. (Credit: Stan Honda/AFP/Getty Images) 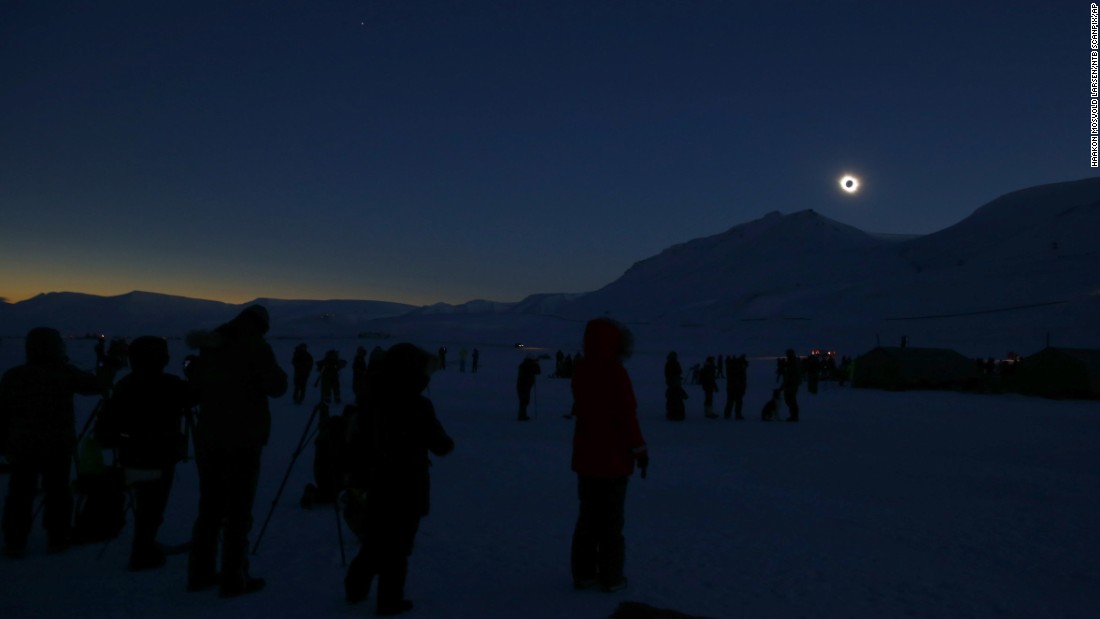 Some people may be interested in uploading their images, and in my essay on Geotagging I describe two ways that you can upload your selfies so that others can enjoy your efforts. The first is to use GOOGLE Maps but you can only upload your photo to  preexisting ‘tagged’ locations in GOOGLE Maps (nearby businesses, monuments, parks, etc). This is unlike the discontinued Panoramio/GOOGLE Earth feature where you could upload your picture to any geographic location on the planet. The second way is to send your pictures to a NASA site that is collecting them.

For a rare event like this, you might also want to create a time capsule of your experience. I have suggested that you write a letter to yourself about who you are today, and what you think the future holds for you. On April 8, 2024 there will be another total solar eclipse across the continental United States and you might set that date as the time when you next read your letter being at that time 7 years older!

People have observed total solar eclipses for centuries, and in my Eclipse History area I have a number of essays that describe earlier observations in the United States. There is even an archive of newspaper articles since the early 1800s in which you can read  first-hand accounts. Some music has also been written and performed with solar eclipses in mind! In my Music Page I list many of these pieces both in classical and pop music over the years. Who can forget Carly Simon’s ‘…You flew your Lear Jet to Nova Scotia to see the total eclipse of the sun’ about the March 7, 1970 eclipse! 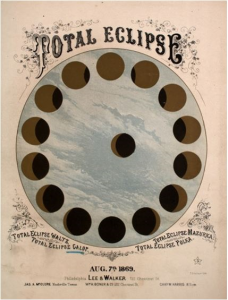 One thing I find interesting is that since the 1500s there have been over a dozen eclipse paths that have crossed the one for August 21, 2017. I created several resources that describe these ‘magical’ crossing points and what history was going on in North America during these dates. I also created a set of math problems where you can calculate the latitude and longitude for these crossing points  if you are in-to math!

Where should you go to see this eclipse? In one essay I discussed how  there are dozens of airline flights on that day from which passengers may be able to see the total solar eclipse out their windows if the Captain gets you to the right place and time along the route. For folks on the ground, you can check out NASA’s Path of Totality maps and see if your travels on that day take you anywhere close. For the rest of us, no matter where you are in North America, you will at least see a partial solar eclipse where a small ‘bite’ is taken out of the solar disk. With a pair of welder’s goggles or solar viewing glasses, you can look up anytime around noon and see the eclipse in progress.

NASA plans to collect stunning images from some of its available spacecraft, so on this page I collected information about which spacecraft will participate. After the eclipse, you will see in the News Media many of these images as they are produced during the days after the event.

Myself, I will be joining the NASA Eclipse Team in Carbondale, Illinois for a huge public celebration of the total solar eclipse. This will be televised through numerous NASA feeds all along the path of the eclipse so you can view it on your smartphone or laptop screen wherever you are. I will be involved with this telecast between 11:45 and 1:45 CDT as a panelist on several of the program segments. When I return from this event, or perhaps even during it, I will upload a follow-up blog about what it was like from ‘Ground Zero’. I have never experienced a total solar eclipse before, so I am prepared to be stunned and amazed!