In the midst of an active research career in astrophysics, in 2008 I was diagnosed with non-Hodgkins Lymphoma, and my world ended.

For the next eight years I learned to live with the cancer growing slowly within me like some creature out of the infamous ‘Alien’ movie series. Annual tests showed the dozens of affected lymph nodes were very slowly growing in size by the millimeter, but with luck none of them would  turn dangerous for a decade or more. But no one could predict when my cancer would ‘transform’ and become dangerously aggressive, requiring immediate chemotherapy. Actuarial forecasts said that the probability of transformation increased by 5% per year, so that after 10 years I would have a 50/50 chance of my NHL becoming aggressive, but it could happen sooner. …or much later. As a scientist, this uncertain diagnosis was devastating.

A scientist conducts research based on the a priori assumption that they will live to see the end of their work and to publish the results.  I just know you are going to say ‘Well, no one knows when they are going to die’, but among those of us who deal with cancer, these kinds of sentiments seem insensitive and a bit flippant no matter how well-intended.

How does one function when one does not know when the monster will spring out of hiding and put the kibosh on your current work? Many of my projects required several years of work, followed by months of writing-up the results and interacting with referees and journal editors to publish the results. You simply cannot muster the stamina to carry-on your research and deal with referees when you are on a short, emotional leash.

Coping with an uncertain future in research

I immediately began to wean myself away from the rigors of research and instead moved into the area of education where NASA had a huge footprint. I won two grants to develop my SpaceMath@NASA resource, which grew every year to become a significant mathematics resource for educators. I even became known in some circles as Dr. Space Math! This was an intensely therapeutic undertaking for me because could write new math problems and design new math books whenever I chose to on my timetable, and if I literally died tomorrow, I would have left behind a complete archive of fun math resources. It was an open-ended commitment that suited my new frame-of-mind, and still made me feel as though I was contributing, intellectually, to a Greater Good: The education of our children.

As the years began to add up, 5…6..7…8  I started to realize that I might be in this cancer frame-of-mind for the long haul. But by this time my hiatus from research, and my ‘advanced age’ of 64, precluded any re-entry into the level of research I had enjoyed in my earlier years. It was very sad to see this part of my career waste away, but considering I was in my peri-retirement years, perhaps as it is for so many other scientists, this transition was inevitable.

In 2016 my NHL became aggressive after eight years of near-dormancy. I was quickly rushed into a course of immunotherapy with a monthly infusion of Rituximab and Bendemustine for six months. At the end, a PET scan showed in November, 2017 that there wasn’t a sign of  the NHL anywhere, and my oncologist, Dr. Bruce Cheson at MedStar/Georgetown University Hospital in Washington DC pronounced me in remission. For the next two years, if there was no further sign of the NHL, he would consider me cured!

All of a sudden my attitude seemed to change almost literally over-night. I was anxious to start new research projects that, at least for now, could be completed in six months or less including writing up the results and submitting to the Journals. I had been out of my own research area for too long, and besides no astronomer at the age of 65 worries about new research unless they are still employed at a stable faculty or government job…which I was not. But I did have a part-time position at NASA working on citizen science activities. I was also involved in some very fun research trying to determine how well smartphones performed as scientific data-gathering sensors. That was starting to generate a pipeline of short-term projects culminating in several papers every year. But now that I was in remission, I could start to think about more complicated projects to tackle once again.

So I, basically, have come full circle in research having wandered for eight years in the dreary and uncertain desert of non-research work. 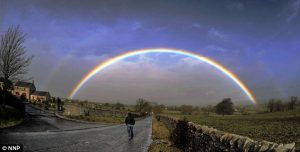