Something weird is going on in the universe that is causing astronomers and physicists to lose a bit of sleep at night. You have probably heard about the discovery of dark energy and the accelerating expansion of the universe. This is a sign that something is afoot that may not have a pleasant outcome for our universe or the life in it.

The basic idea is that our universe has been steadily expanding in scale since 14 billion years ago when it flashed into existence in an inconceivably dense and hot explosion. Today we can look around us and see this expansion as the constantly- increasing distances between galaxies embedded in space. Astronomers measure this change in terms of a single number called the Hubble Constant which has a value of about 70 km/sec per megaparsecs. For every million parsecs of separation between galaxies, a distance of 3.24 million light years, you will see distant galaxies speeding away from each other at 70 km/sec . This conventional Big Bang theory has been the main-stay of cosmology for decades and it has helped explain everything from the formation of galaxies to the abundance of hydrogen and helium in the universe. 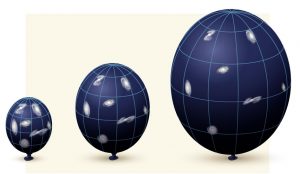 Beginning in the 1980’s, physicists such as Alan Guth and Andre Linde added some new physics to the Big Bang based on cutting-edge ideas in theoretical physics. For a decade, physicists had been working on ways to unify the three forces in nature: electromagnetism, and the strong and weak nuclear forces. This led to the idea that just as the Higgs Field was needed to make the electromagnetic and weak forces look different rather than behave as nearly identical ‘electroweak’ forces, the strong force needed its own ‘scalar field’ field to break its symmetry with the electroweak force.

When Guth and Linde added this field to the equations of Big Bang cosmology they made a dramatic discovery. As the universe expanded and cooled, for a brief time this new scalar field made the transition between a state where it allowed the electroweak and strong forces to look identical, and a state where this symmetry was broken representing the current state of affairs. This period of time extended from about 10(-37) second to 10(-35) seconds; a mere instant in cosmic time, but the impact of this event was spectacular. Instead of the universe expanding at a steady rate in time as it does now, the separations between particles increased exponentially in time in a process called Inflation. Physicists now had a proper name for this scalar field: The Inflaton Field. 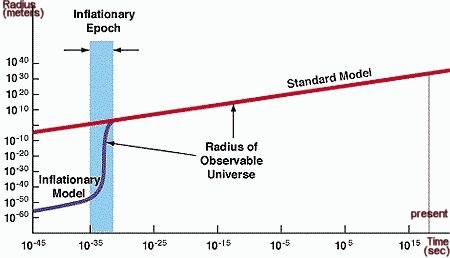 Observational cosmology has been able to verify since the 1990s that the universe did, indeed, pass through such an inflationary era at about the calculated time. The expansion of space at a rate many trillions of times faster than the speed of light insured that we live in a universe that looks as ours does, especially in terms of the uniformity of the cosmic ‘fireball’ temperature. It’s 2.7 kelvins no matter where you look, which would have been impossible had the Inflationary Era not existed.

When you examine how this transition from False to True Vacuum occurred in Einstein’s equations that described Big Bang cosmology, a universe in which the False Vacuum existed was an exponentially expanding space, while the space inside the True Vacuum bubbles was only expanding at a simple, constant rate defined by Hubble’s Constant. So at the time of inflation, we have to think of the universe as a patina of True Vacuum bubbles embedded in an exponentially-expanding space still caught in the False Vacuum. What this means for us today is that we are living inside one of these True Vacuum bubbles where everything looks about the same and uniform, but out there beyond our visible universe horizon some 14 billion light years away, we eventually enter that exponentially-expanding False Vacuum universe. Our own little bubble may actually be billions of times bigger than what we can see around us. It also means that we will never be able to see what these other distant bubbles look like because they are expanding away from us at many times the speed of light. 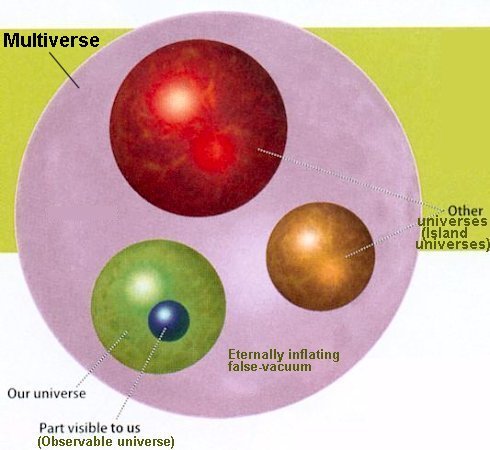 You may have heard of Dark Energy and what astronomers have detected as the accelerating expansion of the universe. By looking at distant supernova, we can detect that since 6 billion years after the Big Bang, our universe has not been expanding at a steady rate at all. The separations between galaxies has been increasing at an exponential rate. This is caused by Dark Energy, which is present in every cubic meter of space .The more space there is as the universe expands, the more Dark Energy and the faster the universe expands. What this means is that we are living in a False Vacuum state today in which a new Inflaton Field is causing space to dilate exponentially. It doesn’t seem too uncomfortable for us right now, but the longer this state persists, the greater is the probability our corner of the universe will see a ‘bubble’ of the new True Vacuum appear. Inside this bubble there will be slightly different physics such as the mass of the electron or the quark may be different. We don’t know when our corner of the universe will switch over to its True Vacuum state. It could be tomorrow or 100 billion years from now. But there is one thing we do know about this progressive, accelerated expansion.

Eventually, distant galaxies will be receding from our Milky Way at faster that the speed of light as they are helplessly carried along by a monstrously-dilating space. This also means they will become permanently invisible for the rest of eternity as their light signals never keep pace with the exponentially-increasing space between them. Meanwhile, our Milky Way will become the only cosmic collection of matter we will ever be able to see from then on. It is predicted that this situation will occur about 100 billion years from now when the Andromeda Galaxy will pass beyond this distant horizon.

As for what the new physics will be in the future True Vacuum state is anyone’s guess. If the difference in energy between the False and True vacuum is only a small fraction of the mass of a neutrino (a few electron-Volts) we may hardly know that it happened and life will continue. But if it is comparable to the mass of the electron (512,000 eV), we are in for some devastating and fatal surprises best not contemplated.

Check back here on  Tuesday, May 16  for my next topic!