What happens to all this sensory information that gives you a concrete idea about the things that exist in your world?

We saw how the flow of sensory information at any one time is enormous. It starts out as separate streams of information that flow to specific brain regions as their first stop, but then after that the information radiates to many different regions in the brain where it gets mixed with our emotions, and even with other sensory information. This is a process that is called association, and a large volume of the brain is called the Association Cortex for that reason. 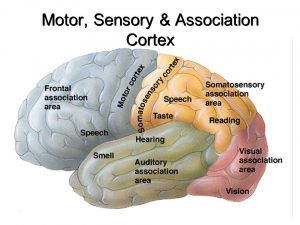 At first the auditory information called purring, is connected to other sensory information occurring at the same time, for instance, the feeling that something furry is brushing against your leg. These two pieces of information become associated with each other, especially if they are connected to a similar combination you experienced earlier, and which was associated in your language cortex as the sound of the word ‘cat’ or the written word ‘cat’. Communicating this information is then handled by Broca’s Area (speech generation ) and Wernicke’s Area (speech comprehension).

The brain creates meaning by associating sensory information with specific categories of past experience. Nothing can really be understood except through a complex process of being associated with other things you have experienced, or learned. It’s like some enormous, interlinked tapestry of connections, and adding a new bit of information is always about fitting it into what has already been experienced in some way. But if that were all that there is, we would simply be walking encyclopedias.

Most of us have senses that are pretty well-defined. For example, the optic nerve transmits what each eye’s retinas detect and passes this on to the visual cortex at the back of the head after some of this information is first linked by neurons to a small brain region called the suprachiasmatic nucleus and then on to the pineal gland (to detect the day-night cycle). It also connects with the thalamus where it gets associated with other sensory stimuli. The three types of retinal cone cells are tuned to slightly different wavelengths of light and send the usual neural signals along the optic nerve. The outside world actually has no color at all. Everything is decided by the wavelength of light, and this number does not include color information. But by the time the visual cortex and its related association cortex is finished processing the information from the cones, you have a definite internal sense of color being an intimate part of the world. This is, however, very different than seeing the world in black and white, which is actually a better representation of what the world looks like. Our retina also have rod cells that are very sensitive to light intensity at all visual wavelengths, but give you only a sense of a grey world!

By coding light frequency information as well as intensity, our eyes and brains over eons of evolution have ‘decided’ that this extra color information has survival value. It can help classify things in terms of specific frequency fingerprints. For example, a coral snake is deadly and a scarlet king snake is harmless. Their skins have yellow and red bands, and the rhyme ‘Red touch yellow, kills a fellow but red touch black is a friend of Jack’ helps you distinguish between the two. You would be dead if all you could see is black and white. In fact, the complex color selections seen in nature have actually co-evolved with color vision over millions of years. The scarlet king snake adapted a version of the color coding used by coral snakes to fool predators into thinking it was a poisonous snake!

Sometimes this process can be flawed. We all know about color blindness, which affects about 8% of men and 0.5% of women. This happens when one of the three cone cell populations in the retina do not work properly. There is no way for the brain to correct for this because the retina has eliminated an important color sense long before the information reaches the optic nerve and the visual cortex.
There is another sensory malady that is even more unusual. Called synesthesia, it is caused by synaptic connections between otherwise separate sensory channels. For instance, you might see letters of the alphabet as having distinct colors on the page, or associate a specific sound with a color, among dozens of other documented possibilities. It is actually much more common than you might suspect. Have you ever felt that numbers have a definite location in space, or that 1980 is ‘farther away’ than 1990? Studies of the brain show that these mixings happen because of cross-wiring of neurons in the brain, either due to genetics or due to training when you were very young.

So, it isn’t even true that everyone perceives the outside world in identical manners. This leads to differences in how each person categorizes events and their internal associations with other things we have experienced. So with all of these variations in exactly what a ‘cat’ is, how do we create models of the world that let us function and survive without having accidents and getting killed all the time?

In my next blog I will describe two very unusual, personal experiences that show how our experience of the world can be temporarily distorted.

Check back here on Monday, December 5 for the next installment!
Seeing Color: http://www.webexhibits.org/causesofcolor/1C.html