You would think that a scientist lives in a purely rational world, but sometimes even we fall victim to events that are hard to explain at the moment. Here are my two favorite, and involuntary, journeys into the world of altered states!

I have had three experiences that some sufferers of migraine headaches may know all too well. Suddenly from out of nowhere, you may see flashing or shimmering lights, zigzagging lines, or stars. Some people even describe psychedelic images. For me, each one came on suddenly and caused me a bit of consternation before I figured out what was going on! 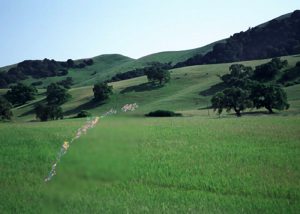 Each time, I saw a jagged crescent-shaped light that drifted across my visual field. I did not have a migraine headache either before or after, since I do not suffer from these painful conditions. But the shape and behavior of the image was identical to such migraine auras.

Called scintillating scotomas by opthamologists, in my case the effect occurred in the same part of my visual field no matter where I moved my eyes, so I knew that something was going on way up in my brain to cause it, and not in my retinas, like the experience of having those pesky ‘floaters’. Instead, it is caused by what is termed a ‘cortical spreading depression’. This is literally a physical wave of hyperstimulation followed by neural inhibition, that spreads out from the visual cortex and into the surrounding association areas at a speed of about 5 millimeters per minute. The whole thing lasts less 60 minutes and is quite amazing and slightly painful to watch. If you are driving a car at the time, it is extremely distracting and even dangerous. My events began as a flickering spot that expanded into a nearly ring-like, zig-zag shape about half the size of my visual field before fading away.

You can find simulations of this phenomenon at the Wikipedia page.
https://en.wikipedia.org/wiki/Scintillating_scotoma

The second perceptual event that I have never forgotten was much more complex.

I woke up in the semi-darkness of my bedroom and could see the dim shapes of the furniture around me, but I absolutely could not move so much as an eyelash. My eyes were open, but felt like they were very dry and begging for me to blink to get some tears going to reduce the irritation. But that was not the thing that captured my attention. There, floating at arms-length was a bright visual scene about as big as a dinner plate that had a horse running around in a corral. As I watched, the initially very clear image became less and less distinct until it faded out completely. Within a few minutes, sounds began to flood back and I could again move around in a fully awake state.

I had this experience in my early-50s and it was never to reoccur. Now, I have had quite a few waking dreams in my life, where I woke up in a dream realizing where I was, then waking up a second time to the real world, but this was a completely different experience.I have searched the literature to look for an explanation, and come across discussions of waking dreams and lucid dreaming, but this event seems to be different. Unlike a lucid dream, I was not aware that I was dreaming as I was watching the visual scenery of the horse in the corral. Instead it did not seem like an unusual experience at all. My tendency towards scientifically analyzing my experiences did not kick-in. All I could do was watch and marvel at the event with a feeling of awe, and definitely not fear.The nearest I could find to my experience is the ‘Type 2 false awakening’ where ‘The subject appears to wake up in a realistic manner, but to an atmosphere of suspense.[…] The dreamers surroundings may at first appear normal, and they may gradually become aware of something uncanny in the atmosphere, and perhaps of unwanted [unusual] sounds and movements.’

There is also the phenomenon of sleep paralysis ‘in which an individual briefly experiences an inability to move, speak, or react. It is often accompanied by terrifying hallucinations to which one is unable to react due to paralysis, and physical experiences. These hallucinations often involve a person or supernatural creature suffocating or terrifying the individual, accompanied by a feeling of pressure on one’s chest and difficulty breathing.’

Well, there was nothing terrifying about my experience. In fact, it was extremely pleasurable and awe-inspiring!

In reflecting back on these events, I find myself delighted that I experienced them because sometimes you want to have experiences in life that are extremely unusual and hard to explain just to have something to think about other than the predictable day-to-day world. I’m sure there are detailed medical reasons for each of my apparitions, because they all are related to how my brain works. Our brains are amazing organs that work overtime to make sense of the world, but they are still fallible.The difference between passing a kidney stone and a minor hiccup in the brain, is that our kidneys are not conscious. But, any little innocent tweak to our brain physiology is immediately interpreted as a change in behavior or of our conscious experience of the world.

So the next time you experience something ‘odd’, don’t be too worried about it. Just sit back and try to enjoy the altered experience. In the end, it may only be a completely innocent, though inscrutable, brain hiccup!

In my next blog I will describe how a brain filled with complex associations manages to make sense of it all!

Check back here on Wednesday, December 7 for the next installment!