In my previous blogs, I briefly described how the human brain perceives and models space (Oops one more thing), how Einstein and other physicists dismiss space as an illusion (Relativity and space ), how relativity deals with the concept of space (So what IS space?), what a theory of quantum gravity would have to look like (Quantum Gravity Oh my! ), and along the way why the idea of infinity is not physically real (Is infinity real?) and why space is not nothing (Thinking about Nothing).  I even discussed how it is important to ‘think visually’ when trying to model the universe such as the ‘strings’ and ‘loops’ used by physicists as an analog to space (Thinking Visually)

And still these blogs do not exhaust the scope of either the idea of space itself or the research in progress to get to the bottom of our experience of it.

This essay, based on a talk I gave at the Belmont Astronomical Society on October 5, 2017 will try to cover some of these other ideas and approaches that are loosely believed to be a part of a future theory of quantum gravity.

What is quantum gravity?

It is the basic idea that the two great theories of physics, Quantum Mechanics and General Relativity are incompatible with each other and do not actually deal with the same ingredients to the world: space(time) and matter. Quantum gravity is a hypothetical theory that unifies these two great ideas into a single language, revealing answers to some of the deepest questions we know how to ask about the physical world. It truly is the Holy Grail of physics.

Why do we need quantum gravity at all?

Quantum mechanics is a theory that describes matter and fields embedded in a pre-existing spacetime that has no physical effect on these fields other than to provide coordinates for describing where they are in time and space. It is said to be a background-dependent theory. General relativity is only a theory of space(time) and does not describe matter’s essence at all. It describes how matter affects the geometry of spacetime and how spacetime affects the motion of matter, but does so in purely ‘classical’ terms. Most importantly, general relativity says there is no pre-existing spacetime at all. It is called a background-independent theory. Quantum gravity is an overarching background-independent theory that accounts for the quantum nature of matter and also the quantum nature of spacetime at scales where these effects are important, called the Planck scale where the smallest unit of space is 10^-33 cm and the smallest unit of time is 10^-43 seconds.

We need quantum gravity because calculations in quantum mechanics are plagued by ‘infinities’ that come about because QM assumes space(time) is infinitely divisible into smaller units of length. When physical processes and field intensities are summed over smaller and smaller lengths to build up a prediction, the infinitesimally small units lead to infinitely large contributions which ‘blow up’ the calculations unless some mathematical method called ‘renormalization’ is used. But the gravitational field escribed by general relativity cannot be renormalized to eliminate its infinities. Only by placing a lower limit ‘cutoff’ to space(time) as quantum gravity does is this problem eliminated and all calculations become finite.

We also need quantum gravity because it is believed that any fundamental theory of our physical world has to be background-independent as general relativity shows that spacetime is. That means that quantum mechanics is currently an incomplete theory because it still requires the scaffolding of a pre-existing spacetime and does not ‘create’ this scaffolding from within itself the way that general relativity does.

So what is the big picture?

Historically, Newton gave us space and time as eternally absolute and fixed prerequisites to our world that were defined once and for all before we even started to describe forces and motion. The second great school of thought at that time was developed by Gottfrid Leibnitz. He said that time and space have no meaning in themselves but only as properties defined by the relationships between bodies. Einstein’s relativity and its experimental vindication has proven that Newton’s Absolute Space and Time are completely false, and replaced them by Leibnitz’s relativity principle. Einstein even said on numerous occasions that space is an imaginary construct that we take for granted in an almost mythical way. Space has no independent existence apart from its emergence out of the relationships between physical bodies. This relationship is so intimate that in general relativity, material bodies define the spacetime geometry itself as a dynamical solution to his famous relativistic equation for gravity.

How does the experience of space emerge?

In general relativity, the only thing that matters are the events along a particle’s worldline, also called its history. These events encode the relationships between bodies, and are created by the intersections of other worldlines from other particles. This network of fundamental worldlines contains all the information you need to describe the global geometry of this network of events and worldlines. It is only the geometry of these worldlines that matters to physical phenomena in the universe.

The wireframe head in this illustration is an analog to worldliness linking together to create a geometry. The black ‘void’ contains no geometric or dimensional information and any points in it do not interact with any worldline that makes up the network. That is why ‘space’ is a myth and the only thing that determine the structure of our 4-d spacetime are the worldliness.

General relativity describes how the geometry of these worldlines creates a 4-dimensional spacetime. These worldlines represent matter particles and general relativity describes how these matter particles create the curvature in the worldlines among the entire system of particles, and thereby creates space and time. The ‘empty’ mathematical points between the worldlines have no physical meaning because they are not connected to events among any of the physical worldlines, which is why Einstein said that the background space in which the worldlines seem to be embedded does not actually exist! When we look out into ‘space’ we are looking along the worldlines of light rays. We are not looking through a pre-existing space. This means we are not seeing ‘things in space’ we are seeing processes in time along a particle’s history!

There are two major quantum gravity theories being worked on today.

String theory says that particles are 1-dimensional loops of ‘something’ that are defined in a 10-dimensional spacetime of which 4 dimensions are the Big Ones we see around us. The others are compact and through their geometric symmetries define the properties of the particles themselves. It is an approach to quantum gravity that has several problems. 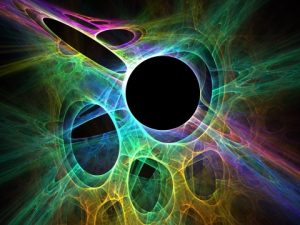 This figure is an imaginative rendering of a ‘string’.

First it assumes that spacetime already exists for the strings to move within. It is a background-dependent theory in the same spirit as Newton’s Absolute Space and Time. Secondly, string theory is only a theory of matter and its quantum properties at the Planck scales, but in fact the scale of a string depends on a single parameter called the string tension. If the tension is small, then these string ‘loops’ are thousands of times bigger than the Planck scale, and there is no constraint on what the actual value of the tension should be. It is an adjustable parameter. 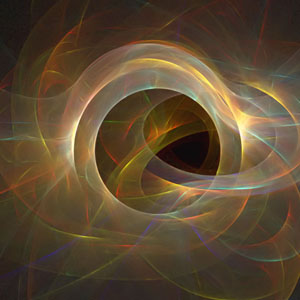 This figure is an imaginative rendering of a ‘loop’

Loop Quantum Gravity is purely a theory of spacetime and does not treat the matter covered by quantum mechanics. It is a background-independent theory that is able to exactly calculate the answers to many problems in gravitation theory, unlike string theory which has to sneak up on the answers by summing an infinite number of alternate possibilities. LQG arrives at the answer ‘2.0’ in one step as an exact answer while for example string theory has to sum the sequence 1+1/2+1/4+1/8+1/16 +…. To get to 2.000.

LQG works with elementary spacetime ingredients called nodes and edges to create spin networks and spin foam. Like a magnetic field line that carries magnetic flux, these edges act like the field lines to space and carry quantized areas 1 Planck length squared. By summing over the number of nodes in a spin network region, each node carries a quantum unit of space volume. These nodes are related to each other in a network of intersecting lines called a spin network, which for very large networks begins to look like a snapshot of space seen at a specific instant. The change of one network into another is called a spin foam and it is the antecedent to 4-d spacetime. There is no physical meaning to the nodes and edges themselves just as there is no physical meaning to the 1-d loops than make up strings in string theory. . They are pure mathematical constructs.

So far, the best idea is that LQG forms the bedrock for string theory. String theory looks at spacetime and matter far above the Planck scale, and this is where the properties of matter particles make their appearance. LQG creates the background of spacetime that strings move through. However there is a major problem. LQG predicts that the cosmological constant must be negative and small, which is what is astronomically observed, while string theory says that the cosmological constant is large and positive. Also, although LQG can reconstruct the large 4-d spacetime that we live in, it does not seem to have have any room for the additional 6 dimensions required by string theory to create the properties of the particles we observe. One possibility is that these extra dimensions are not space-like at all but merely ‘bookkeeping’ tools that physicists have to use which will eventually be replaced in the future by a fully 4-d theory of strings. 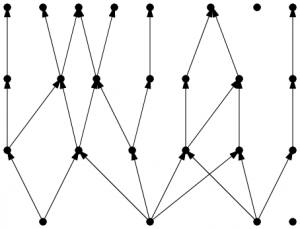 Another approach still in its infancy is Causal Set Theory. Like LQG it is a background-independent theory of spacetime. It starts with a collection of points that are linked together by only one guiding principle, that pairs of points are ordered by cause-and-effect. This defines how these points are ordered in time, but this is the only organizing principle for points in the set. What investigators have found is that such sets create from within themselves the physical concepts of distance and time and lead to relativistic spacetimes. Causal Sets and the nodes in LQG spin networks may be related to each other.

Another exciting discovery that relates to how the elements of quantum spacetime create spacetime involves the Holographic Principle connected with quantum entanglement.

The Holographic Principle states that all the information and relationships found in a 3-d volume are ‘encoded’ on a 2-d surface screen that surrounds this volume. This means that relationships among the surface elements are reflected in the behavior of the interior physics. Recently it was discovered that if you use quantum entanglement to connect two points on the surface, the corresponding points in the interior become linked together as a physical unit. If you turn off the entanglement on the surface the interior points become unconnected and the interior space dissolves into unrelated points. The amount of entanglement can be directly related to how physically close the points are, and so this is how a unified geometry for spacetime inside the 3-d ‘bulk’ can arise from unconnected points linked together by quantum entanglement.