Most of my childhood was spent in a wonderful twilight of comprehension between my imaginary world and the world I was being introduced to in school, and through my many science-related hobbies. I make no apologies for this as an adult scientist, and consider my tenure in this wonderful place, time well spent in nurturing the person I am today. 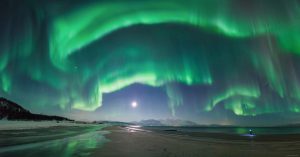 Even now, as I look back over 64 years of amazing life, there remain a handful of events that standout, and for which I have no good explanation…nor do I chose to seek for one!

The first of these was in 9th grade, when as I was walking home from school, leaping one-by-one up the 52 stairs from Galindo Street to Carrington in Oakland. Suddenly, my breathless and speedy stride was broken by the sight of a paperback book tossed to the side of one of the steps. I picked it up and noted the author was Franck Edwards; the title of the book was ‘Stranger than Science’. For the next few days I stayed up late into the night reading about spontaneous human combustion, strange disappearances, and a whole host of other ‘documented’ occurrences that science could not explain. So, where did the book come from and why did I happen upon it at exactly that moment?

The next event happened while I was visiting my cousins Dan and Annika at their summer home in Sweden. Dan and I decided to take his moped out for a ride down a rocky deserted road, several miles from their house. It was an overcast swampland scene with seagulls screeching overhead. We randomly stopped and I hopped off to turn over some large stones, looking for whatever might be under them. A salamander? A nest of peculiar insects? After a few tries, and under the fourth stone, there laid a 5-krown paper note. What were the odds of finding Swedish paper money out in the middle of nowhere? Who had put it there? Swedish lore is rife with tales of trolls who live under rocks and stash their valuables there. Sounds like a good explanation to me!

In college, while camping in the high country of Yosemite near Merced Lake, I was shocked to hear, out of nowhere, a peculiar and powerful musical sound. Two deep-base notes rang out from the distant deserted, alpine valley where a thunder storm had been in progress, and for 20 seconds I was entertained in the twilight as these two tones switched back and forth, never changing their pitch in-between cycles. Had the sounds from the thunder been somehow been converted to these pure tones by reflection from canyon walls?

Also in college, I was again standing in the twilight, gazing up at the UC Berkeley urban sky, when eight pinpoint lights forming a V-shape, glided silently by over-head at an apparent speed that eliminated airplane landing lights, or a flock of birds. The shape spanned a dozen full-moons, but made absolutely no sound at all. My first and only ‘UFO’ sighting?

Finally in graduate school at Harvard, I was spending a few days with my brother Richard’s family at their home some two months after his wife, my sister-in-law Darlene, had died. I was still in shock over losing my dear sister, and was spending the night that Christmas in her former home. At about 3:00 am I was awaken by some thing just beyond my view, stroking my cheek. To this day I have poetically interpreted it as my sister-in-law reaching out to console me over my grief in losing her.

Given some thought, we all have accumulated over our lifetimes unusual anecdotes like this, that could not be readily explained because in each instance we did not have the complete set of facts at our disposal from which to form a plausible explanation. In most cases, we even refuse to delve too deeply into them because we have discovered it is rather fun and comforting not to actually know what happened!

Not long after I received my PhD in astronomy in 1982, I happened upon another book that captured my adult imagination. William Corliss (1926-2011) had published the quotidian ‘Handbook of Unusual Natural Phenomena’ in which he had culled from a variety of reputable scientific journals, descriptions of unusual events such as strange sounds, inexplicable lights, and other phenomena. I read it from cover to cover, with both the practiced gaze of a freshly-minted scientist, and that 10-year-old that I used to be. I still like to turn its pages from time to time and read 19th century reports of ball lightning, earthquake lights, unusual aurora and other things that probably do have a rational explanation. But what to I make of ‘ghost lights’, ‘rains of frogs’ and other things that stir up human emotions of deep mystery and ‘things going bump in the night’?

A future science will no doubt find explanations for them, but for now I remain happy that they are a part of my world, though not currently explained. In the end, we do have to leave SOMETHING for our children to explore!

In the next blog, I will describe how strokes have helped neuroscientists understand how human brains create consistent explanatory models of the world, and how this process can break down with some rather unbelievable results!

Check back here on Tuesday, November 29 for the next installment!

One thought on “Stranger than Science?”