When we think about the Big Bang we tend only to look at the first few instants when we think all of the mysterious and exciting action occurred. But actually, the first BILLION years are the real stars of this story!

My books ‘Eternity:A Users Guide’ and ‘Cosmic History I and II’ provide a more thorough, and ‘twitterized’, timeline of the universe from the Big Bang to the literal end of time if you are interested in the whole story as we know it today. You can also look at a massive computer simulation developed by Harvard and MIT cosmologists in 2014.

What we understand today is not merely based on theoretical expectations. Thanks to specific observations during the last decade, we have actually discovered distant objects that help us probe critical moments during this span of time.

By the end of the first 10 minutes after the Big Bang, the universe was filled with a cooling plasma of hydrogen and helium nuclei and electrons – too hot to come together to form neutral atoms at seething temperatures over 100 million Celsius. The traces that we do see of the fireball light from the Big Bang are called the cosmic background radiation, and astronomers have been studying it since the 1960s. Today, the temperature is 2.726 kelvins, but at one part in 100,000 there are irregularities in its temperature across the entire sky detected by the COBE, WMAP and Planck satellites and shown below. These irregularities are the gravitational fingerprints of vast clusters of galaxies that formed in the infant universe after several more billion years. 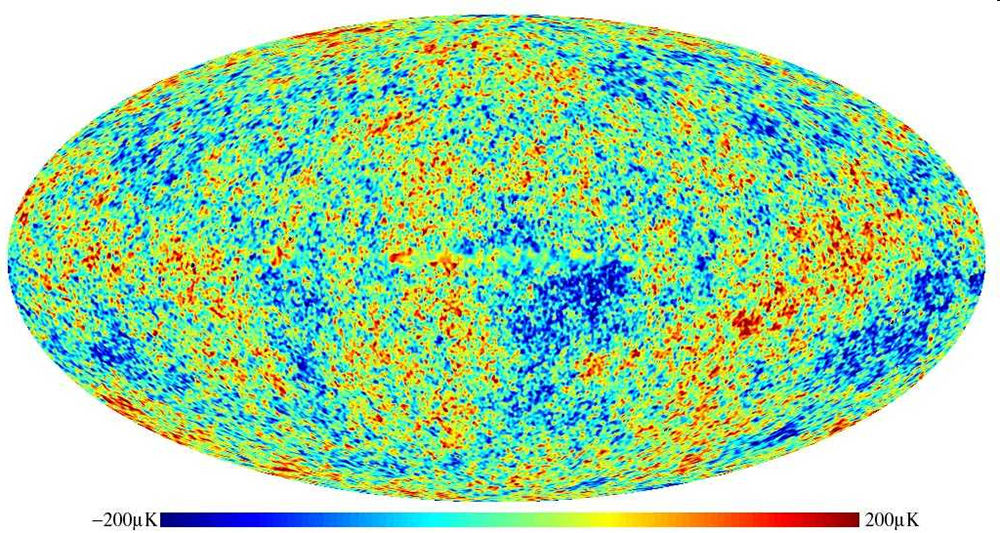 By 379,000 years, matter had cooled down to the point where electrons could bond with atomic nuclei to form neutral atoms of hydrogen and helium. For the first time in cosmic history, matter could go its own way and no longer be affected by the fireball radiation, which used to blast these assembled atoms apart faster than they could form. If you were living at this time, it would look like you were standing inside the surface of a vast dull-red star steadily fading to black as the universe continued to expand, and the gas steadily cooled over the millennia. No matter where you stood in the universe at this time, all you would see around you is  this dull-red glow across the sky.

6 million years – By this time, the cosmic gas has cooled to the point that its temperature was only 500 kelvins (440 F). At these temperatures, it no longer emits any  visible light. The universe is now fully in what astronomers call The Cosmic Dark Ages. If you were there and looking around, you would see nothing but an inky blackness no matter where you looked! With infrared eyes, however, you would see the cosmos filled by a glow spanning the entire sky. 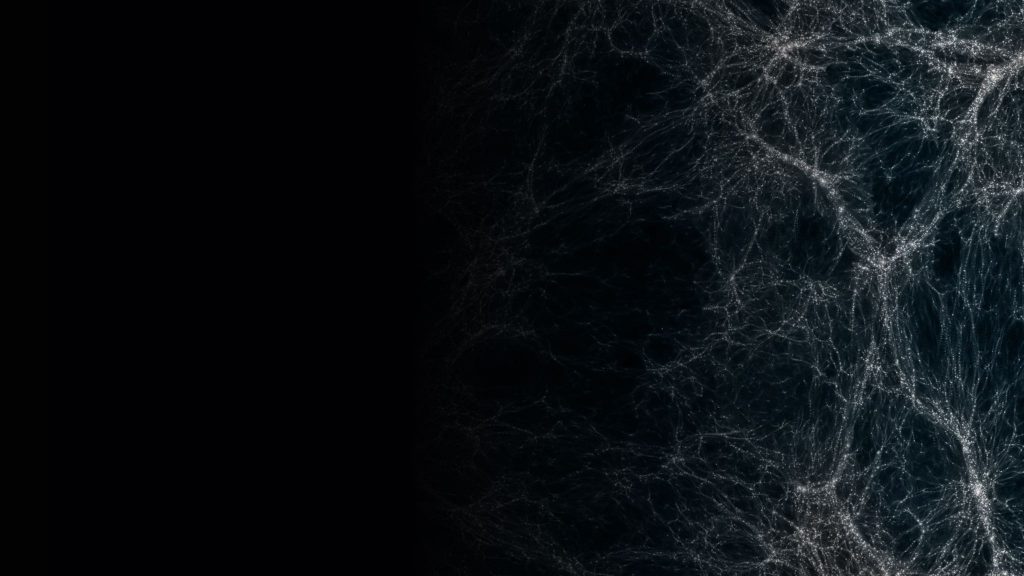 20 million years – The hydrogen-helium gas that exists all across the universe is starting to feel the gravity effects of dark matter, which has started to form large clumps and vast spiders-web-like networks spanning the entire cosmos, with a mass of several trillion times the mass of our sun. As the cold, primordial gas falls into these gravity wells, it forms what will later become the halos of modern-day galaxies. All of this hidden under a cloak of complete darkness because there was as yet no physical objects in existence to light things up. Only detailed supercomputer simulations can reveal what occurred during this time.

100 million years – Once the universe got cold enough, large gas clouds stopped being controlled by their internal pressure, and gravity started to take the upper hand. First the vast collections of matter destined to become the haloes of galaxies formed. Then, or at about the same time, the first generation of stars appeared in the universe. These Population III stars made from nearly transparent hydrogen and helium gas were so massive, they lived for only a few million years before detonating as supernova. As the universe becomes polluted with heavier elements from billions of supernovae, collapsing clouds become more opaque to their own radiation, and so the collapse process stops when much less matter has formed into the infant stars. Instead of only producing massive Population III stars with 100 times our sun’s mass, numerous stars with masses of 50, 20 and 5 times our sun’s form with increasing frequency. Even smaller stars like our own sun begin to appear by the trillions. Most of this activity is occurring in what will eventually become the halo stars in modern galaxies like the Milky Way. The vast networks of dark matter became illuminated from within as stars and galaxies began to form.

The First Quasars and Black Holes

300 million years The most distant known ‘quasar’ is called APM 8279+5255, and contains traces of the element iron. This means that at about this time after the Big Bang, some objects are powered by  enormous black holes that steadily consume a surrounding disk of gas and dust. For APM 8279+5255, the mass of this black hole is about 20 billion times more massive than the Sun. Astronomers do not know how a black hole this massive could gave formed so soon after the Big Bang. A dimple division shows that a 20 billion solar mass black hole forming in 300 million years would require a growth rate higher than 60 solar masses a year!

400 million years – The cold primordial matter becomes clumpy under the action of its own gravity. These clumps have masses of perhaps a few billion times our sun or less, and over time this material starts to collapse locally into even smaller clouds that become mini-galaxies where intense episodes of star formation activity are playing out. 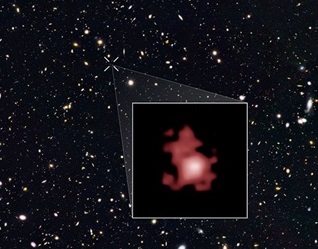 This image shows the position of the most distant galaxy discovered so far with the Hubble Space Telescope. The remote galaxy GN-z11 shown in the inset is actually ablaze with bright young blue stars. They look red in this image because the wavelengths of light have been stretched by the expansion of the universe to longer, redder wavelengths. Like the images of so many other young galaxies, we cannot see individual stars, but their irregular shapes show that the stars they contain are spread out in irregular clumps within their host galaxy, possibly because they are from separate, merging clouds whose collisions have triggered the star-forming activity we see.

Although it is hard work, astronomers can detect the faint reddish traces of dozens of other infant galaxies such as MACS0647-JD, UDFj-39546284 and EGSY-2008532660. These are all  small dwarf galaxies over 100 times less massive than our Milky Way. They are all undergoing intense star forming activity between 400 and 600 million years after the Big Bang. 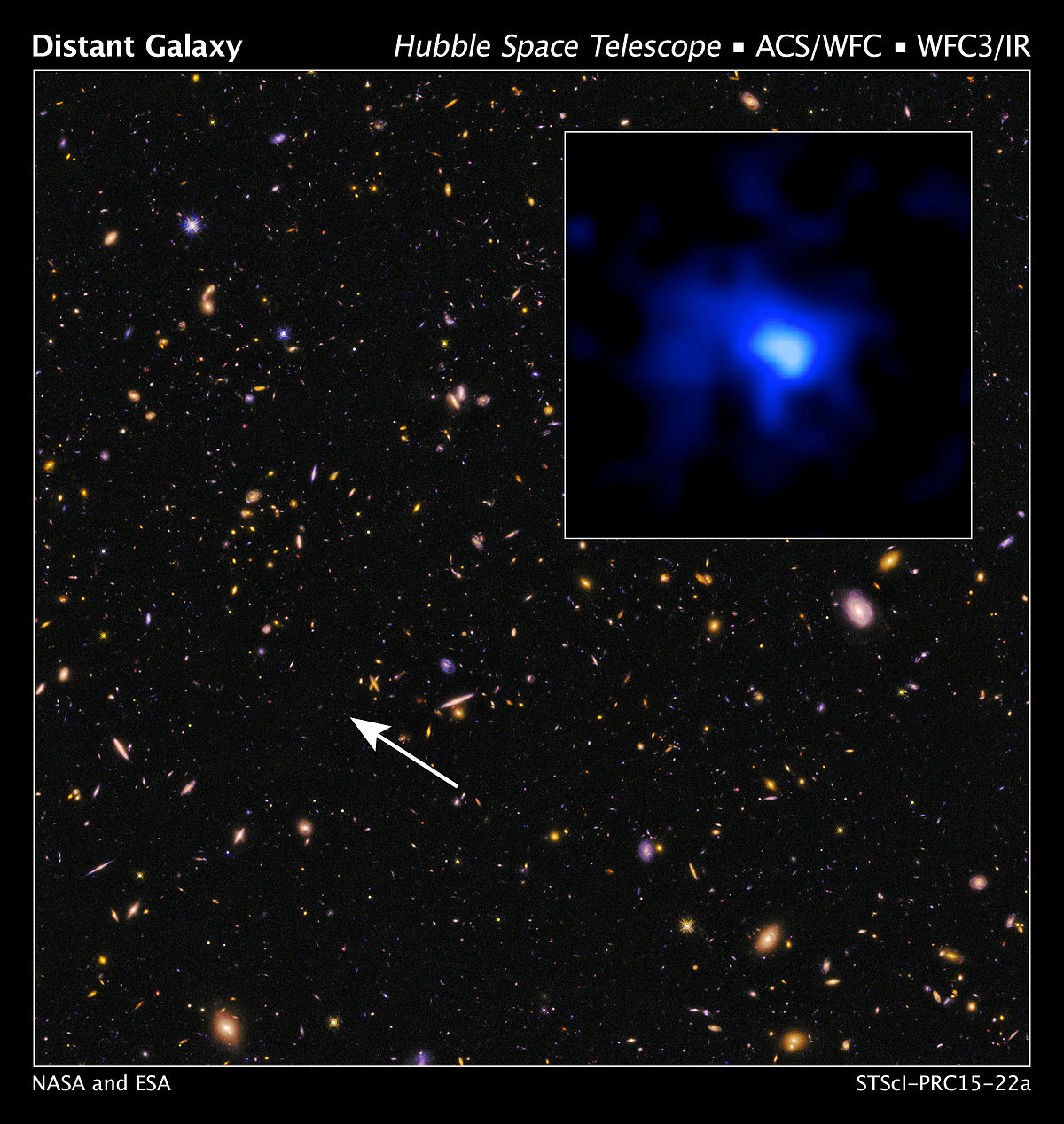 The Gamma-Ray Burst Era begins about 630 million years after the Big Bang. Gamma-ray bursts are caused by very massive stars, perhaps 50 to 100 times our own sun’s mass, that explode as hypernovae and form a single black hole, so we know that these kinds of stars were already forming and dying by this time. Today from ‘across the universe’ we see these events occur about once each day!

800 million years – The quasar ULAS J1120+0641 is another young case of a supermassive black hole that has formed, and by this time is eating its surrounding gas and stars at a prodigious rate. The mass of this black hole is about 2 billion times the mass of our sun, and like others is probably the result of frequent galaxy mergers and rapid eating of surrounding matter.

Also at around this time we encounter the Himiko Lyman Alpha Blob; one of the most massive objects ever discovered in the early universe.  It is 55,000 light-years across, which is half of the diameter of the Milky Way. Objects like Himiko are probably powered by an embedded galaxy that is producing young massive stars at a phenomenal rate of 500 solar masses per year or more. 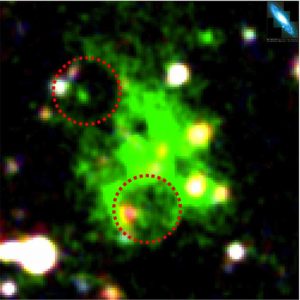 Again the most brilliant objects we can see from a time about 900 million years after the big bang includes galaxies like SDSS J0100+2802 with a luminosity 420 trillion times that of our own Sun. It is powered by a supermassive black hole  12 billion times the mass of our sun.

960 million years – By this time, massive stars in what astronomers call ‘Population III’ are being born by the billions across the entire universe. These massive stars emit almost all of their light in the ultraviolet part of the visible spectrum. There are now so many intense sources of ultraviolet radiation in the universe that all of the remaining hydrogen gas becomes ionized. Astronomers call this the Reionization Era. Within a few hundred million years, only dwarf galaxy-sized blobs of gas still remain and are being quickly evaporated. We can still see the ghosts of these clouds in the light from very distant galaxies. The galaxy SSA22-HCM1 is the brightest of the objects called ‘Lyman-alpha emitters’. It may be producing new stars at a rate of 40 solar masses per year and enormous amounts of ultraviolet light. The galaxy HDF 4-473.0 also spotted at this age is only 7,000 light years across. It has an estimated star formation rate of 13 solar masses per year.

1 billion years First by twos and threes, then by dozens and hundreds, clusters of galaxies begin to form as the gravity of matter pulls the clumps of galaxy-forming matter together. This clustering is speeded up by the additional gravity provided by dark matter. In a universe without dark matter, the number of clusters of galaxies would be dramatically smaller.

Proto-galaxy cluster AZTEC-3 consists of 5 smaller galaxy-like clumps of matter, each forming stars at a prodigious rate. We now begin to see how some of the small clumps in this cluster are falling together and interacting, eventually to become a larger galaxy-sized system. This process of cluster formation is now beginning in earnest as more and more of these ancient clumps fall together under a widening umbrella of gravity. Astronomers are discovering more objects like AzTEC-3, which is the most distant known progenitor to modern elliptical galaxies. By 2.2 billion years after the Big Bang, it appears that half of all the massive elliptical galaxies we see around us today have already formed by this time.

Thanks to the birth and violent deaths of generations of massive Population III stars, the universe is now flooded with heavy elements such as iron, oxygen, carbon and nitrogen: The building blocks for life. But also elements like silicon, iron and uranium which help to build rocky planets and heat their interiors. The light from the quasar J033829.31+002156.3 can be studied in detail and shows that by this time, element-building through supernova explosions of Population III stars has produced lots of carbon, nitrogen and silicon. The earliest planets and life forms based upon these elements now have a chance to appear in the universe. Amazingly, we have already spotted such an ancient world!

At 1 billion years after the Big Bang, the oldest known planet PSR B1620-26 b has already formed. Located in the globular cluster Messier-4, about 12,400 light-years from Earth, it bears the unofficial nicknames “Methuselah” and “The Genesis Planet” because of its extreme age. The planet is in orbit around the two very old stars: A dense white dwarf and a neutron star. The planet has a mass of 2.5 times that of Jupiter, and orbits at a distance a little greater than the distance between Uranus and our own Sun. Each orbit of the planet takes about 100 years.

Although the Hubble Space Telescope strains at its capabilities to see objects at this early stage in cosmic history, the launch of NASA’s Webb Space Telescope will uncover not dozens but thousands of these young pre-galactic objects with its optimized design. Within the next decade, we will have a virtually complete understanding of what happened during and after the Cosmic Dark Ages when the earliest possible sources of light could have formed, and one can only marvel at what new discoveries will turn up.

What an amazing time in which to be alive!

Check back here on Wednesday, May 24 for my next topic!