I don’t think that many people realize that right now, but a few miles north of Geneva, Switzerland and a few hundred meters below the sleepy, bucolic countryside, a leviathan machine 27 km in diameter works round-the-clock to recreate a glimpse of the Big Bang.

Called the Large Hadron Collider (LHC) it is the world’s largest particle collider created in 1998-2008 by a collaboration of over 10,000 scientists and engineers from over 100 countries. It cost $13 billion dollars, and consumes 1 billion kilowatt-hours of electricity each year; enough to run a city of 300,000 homes!

The aim of the LHC is to allow physicists to test the predictions of different theories of particle physics, including measuring the properties of the Higgs boson and searching for the large family of new particles predicted by supersymmetric theories, as well as other unsolved questions of physics.

Since it began full-power operation in 2009, it has made a series of major discoveries that have rocked the physics world. The first of these, some 50 years after its prediction, was the discovery in 2012 of the Higgs Boson; a missing particle in the Standard Model that imbues most particles with their masses. Two years later, two new heavy sub-atomic particles were discovered called the Xi-prime and the Xi-star. Each consists of a bottom-quark, a down-quark and a strange-quark. Then a four-quark particle called the Z(4430) was found in 2014, along with signs of a five-quark combination that decayed into other, more stable particles. By 2016, LHC physicists had detected the light from antimatter hydrogen atoms (an anti-proton orbited by a positron). The findings were that this light was exactly the same as from a normal-matter hydrogen atom, so you really can’t tell the difference between matter and anti-matter from the light it emits!

But there was one other search going on that hasn’t been quite as successful, and with serious consequences.
Since 1978, physicists have explored the mathematical wonders of a new symmetry in nature called supersymmetry. This one shows how the particles that carry forces in the Standard Model (photons, gluons, w-bosons) are related to the matter particles they interact with (electrons, neutrinos, quarks). This symmetry unifies all of the known particles in the Standard Model, and also predicts that all normal particles will have supersymmetry partners with far-higher masses. The electron has a partner called the slectron. The quark has a partner called the squark, and so on. The simplest change in the Standard Model that includes this new mathematical symmetry ( called the Minimal Supersymmetric Standard Model or MSSM) adds 12 new matter particles and 12 new force particles beginning at masses that are 3 times greater than the mass of the normal proton. Amazingly, one of these partners to the normal-matter neutrinos would exactly fit the bill for the dark matter that astronomers have detected across the universe! MSSM predicts the eventual unification of all three forces; electromagnetism, strong and weak. MSSM would also let us accurately predict what happened before the universe was a microsecond old after the Big Bang!

Unfortunately, the search for any signs of supersymmetry particles is not going so well after seven years of sifting through data.

On 8 November 2012, physicists reported on an experiment seen as a “golden” test of supersymmetry by measuring the very rare decay of the Bs meson into two muons. Disconcertingly, the results matched those predicted by the Standard Model rather than the predictions of many alternate versions of the Standard Model with supersymmetry included. New data with the collider now operating at higher energies than ever before, 13 trillion electron volts; 13 TeV) show no traces of superpartners.

As of the start of 2017, it really does look as though the LHC has given us a complete and well-tested Standard Model including the Higgs Boson, but has refused to hand over any signs of new particles existing between 190 GeV and 2,500 GeV (see the predicted particle plot below). This represents a distressing, barren desert which, had it looked as supersymmetry had predicted, should have been filled with dozens of new particles never before seen. 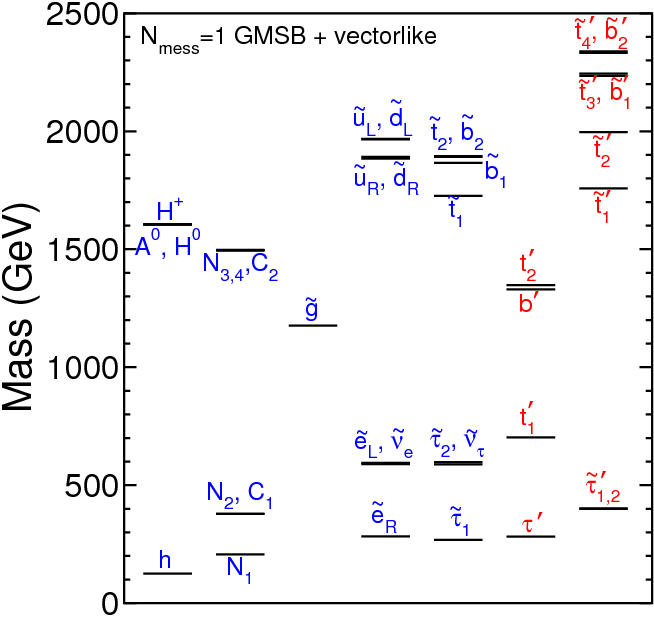 Many physicists are adopting an attitude of “keep calm and carry on.” “I am not yet particularly worried,” says theoretical physicist Carlos Wagner of the University of Chicago. “I think it’s too early. We just started this process.” The LHC has delivered only 1 percent of the data it will collect over its lifetime. But if no firm evidence is found for supersymmetry with the LHC, that also spells the end of another marvelous, mathematical theory that proposes to also unify gravity with the Standard Model. You know this theory by its popular name String Theory.

So a lot is still to come with the LHC in the next 5 years, and in no way is the current machine ‘running on empty’! Even its failure to find new physics will be revolutionary in its own right, and force an exciting re-boot of the entire theoretical approach in physics during the 2020s and beyond.

Check back here on Thursday, January 26 for the next blog!

2 thoughts on “Running on Empty”