If you are trying to understand the world beyond your body, it’s probably a good idea to also understand just how your observations are being made and then interpreted. Our brains process a lot of sensory information, but interpreting it is a lot more fluid and fallible than you might believe!

First of all, there is no ‘person’ inside your head looking through a TV screen into the outside world through your eyes.

Sensory information is received in small bits of impulses traveling along neurons. A visual scene dissolves into clusters of rod and cone cells in the retina that sense edges, colors, and other elemental features of what you are looking at. These qualities are not stored in the visual cortex adjacent to each other like pixels in a picture, but grouped together by thematic features. It is only at the next level of neural connections (called synapses) that associations between areas in the visual cortex are made in order to identify archetypical objects such as cars, houses and, yes, grandmothers! These neurons also make many different synaptic connections along the way to help process the information flow long before you perceive it as an integrated whole. This figure shows, for example, a few of the neural pathways that connect the visual cortex regions ( V1, V2, V3) all the way to the prefrontal cortex (PF). 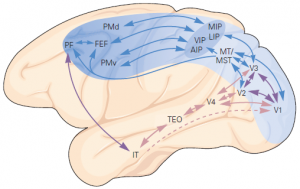 What you see is sometimes not always what you get. Your neural networks may actually remove information from your conscious perception of the world. A frog’s retinas only pass information to its brain when something is moving in the visual field. Its brain doesn’t even GET the basic information that things like perfectly edible flies are standing still on a nearby leaf! Only when they move does the retina communicate to the frog’s brain that there is a fly ‘out there’ to go after and eat. You know that ‘blind spot’ in your eye? The brain fills it in with fabricated information so that you do not see a black spot the size of a quarter at arms-length. Our brain is actually lying to our conscious perception of the world!

Second of all, many of the neurons at the lowest level make connections to the limbic system and are ‘tagged’ with many different emotional states .

The most important of these taggings being the self-preservation, fight-or-flight response. For example, there is very high survival value to quickly tagging a distant shadow as either a predator or a non-predator. Not all shadows will be a lion, but in the grand scheme of evolution even a rule-of-thumb that works only 10% of the time can mean the difference between vital genes being passed on to the next generation or not. This identification has to be made very quickly before you have time to logically consider all the non-threatening possibilities for what the shadow might actually be.

This tendency towards making snap decisions that over-ride time-consuming reasoning has high survival value and is hard-wired into our brains, but it also screws things up as we apply the same data to rationally understanding the world around us. The best case of this is in the eyewitness reporting of crimes. Eyewitnesses are almost always in a highly-emotional state, and great care has to be taken in the courtroom to compare accounts and distill from them the actual facts. Sometimes eyewitness accounts have to be thrown out entirely.

Another big problem with the brain is that it has a nasty habit of using the same neural circuits to handle different tasks. This leads to some extremely crazy situations.

We all like to visually imagine ourselves in different situations as we day dream, read a good novel, or are fast asleep in bed. These visual images and other imagined relationships often use the same circuitry needed for carefully examining the outside world and making sense of it. What this means is that there is actually a neural connection between our imagined world and the hard-rock world we live in. Most people can easily distinguish the difference, but sometimes our imagination, dosed with the limbic system’s associations, can confuse what we are actually seeing or experiencing, not based on an actual experience, but based instead on an imagined one. You can actually improve some elements of sports performance by internally visualizing in detail the actions you want to perform. It seems that imagined activity can train the cerebellum almost as well as the actual act!

Our brain and sensorium have to work together to identify patterns that help us survive, or at least not get injured too badly. There can be some sloppiness in this process that allows a few people to misunderstand gravity and walk out a 35th floor window, but we have evolved so that this is a very rare occurrence. But still, there are many ways in which human perceptions can be misinterpreted or even distorted by the brain as it tries to process billions of bits of information every second against a wash of emotions and other states-of-mind.

In the next blog, I will describe how strokes have helped neuroscientists understand how human brains create consistent models of the world, and how this process can break down with some rather unbelievable results!

Check back here on Sunday, November 27 for the next installment!