In the daytime, you are surrounded by trees, buildings and the all-too-familiar accoutrements of Nature, to which by evolution we were designed to appreciate and be familiar. But at night, we see an unimaginably different view: The dark, starry night sky, with no sense of perspective or depth. It is easy to understand how The Ancients thought it a celestial ceiling with pinpoint lights arrayed in noteworthy patterns. Many millennia of campfires were spent trying to figure it out. 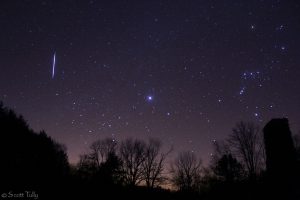 We are stuck in the middle ground between two vast scales that stretch before us and within us. Both, we are told, lead to the infinitely-large and the infinitely-small. But is this really true?

In the microcosm, we have probed the structure of electrons to a scale of 0.000000000000000000001 centimeters and found no signs of any smaller distance yet. So again, there is no sign that we have reached anything like an infinitely-small limit to Nature either.

Infinity is as old as the Ancient Greeks. But even Aristotle (384 – 322 BCE) would only allow the integers (1,2,3,…) to be potentially infinite, but not actually infinite, in quantity. Since then, infinity or its cousin eternity, have become a part of our literary and religious vernacular when we mention something really, really, really….. big or old! Through literary and philosophical repetition, we have become comfortable with this idea in a way that is simply not justifiable.

Mathematics can define infinity very precisely, and even the mathematician Cantor (1845 – 1918) was able to classify ‘transfinite numbers’ as being either representing countable infinities or uncountable infinities. To the extent that mathematics is also used in physics, we inherit infinity as the limit to many of our calculations and models of the physical world. But the problem is that our world is only able to offer us the concept of something being very, very, very… big, like the example of the visible universe above. 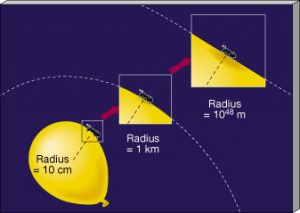 If you take a sphere a foot across and place an ant on it, it crawls around and with a bit of surveying it can tell you the shape is a sphere with a finite closed surface. But now take this sphere and blow it up so that it is 1 million miles across. The ant now looks across its surface and sees something that looks like an infinite plane. Its geometry is as flat as a sheet of paper on a table.

In astronomy we have the same problem.

We make calculations and measurements within the 28 billion light years that spans our visible universe and conclude that the geometry of the universe is flat, and so geometrically it seems infinite, but the only thing the measurements can actually verify is that the universe is very, very, very large and LOOKS like its geometry is that of an infinite, flat, 3-dimensional space. But modern Big Bang cosmology also says that what we are seeing within our visible universe is only a portion of a larger thing that emerged from the Big Bang and ‘inflated’ to enormous size in the first microseconds.  If you identify our visible universe out to 14 billion light years as the size of the period at the end of this sentence, that larger thing predicted by inflation may be millions of miles across at the same scale. This is very, very big, but again it is not infinite!

Going the other way, the current best theoretical ideas about the structure of the physical world seems to suggest that at some point near a so-called Planck scale of 0.0000000000000000000000000000000015 centimeters we literally ‘run out of space’. This mathematical conclusion seems to be the result of combining the two great pillars of all physical science, quantum mechanics and general relativity, into a single ‘unified’ theory.  The mathematics suggests that, rather than being able to probe the nature of matter and space at still-smaller scales, the entire edifice of energy, space, time and matter undergoes a dramatic and final change into something vastly different than anything we have ever experienced: elements that are beyond space and time themselves.  These ideas are captured in theories such as Loop Quantum Gravity and String Theory, but frankly we are still at a very early stage in understanding what this all means. Even more challenging is that we have no obvious way to make any measurements that would directly test whether physical reality simply comes to an end at these scales or not.

So on the cosmological scene, we can convincingly say we have no evidence that anything as large as ‘infinity’ exists because it is literally beyond our 14 billion light-year horizon of detection. The universe is simply not old enough for us to sample such an imponderably large realm. Advances in Big Bang cosmology can only propose that we live in an incomprehensively alien ‘multiverse’ or that we inhabit one miniscule dot in a vastly larger cosmos, which our equations extrapolate as infinity. Meanwhile, the world of the quantum hints that no infinitely-small structures exist in the universe, not even what we like to call space itself can be indefinitely sub-divided below the Planck scale.

In the end, it seems that infinity is a purely  mathematical ideal that can be classified by Cantor’s transfinite numbers manipulated symbolically, and thought about philosophically, but is never actually found among the objects that inhabit our physical world.

Now let’s go back to the issue of space after the relativity revolution and try to make sense of where we stand now!

Check back here on Monday, December 19 for the next installment!

7 thoughts on “Is Infinity Real?”