For 60 years, NASA has used chemical rockets to send its astronauts into space, and to get its spacecraft from planet to planet. The huge million-pound thrusts sustained for only a few minutes were enough to do the job, mainly to break the tyranny of Earth’s gravity and get tons of payload into space. This also means that Mars is over 200 days away from Earth and Pluto is nearly 10 years. The problem: rockets use propellant (called reaction mass) which can only be ejected at speeds of a few kilometers per second. To make interplanetary travel a lot zippier, and to reduce its harmful effects on passenger health, we have to use rocket engines that eject mass at far-higher speeds.

In the 1960s when I was but a wee lad, it was the hey-day of chemical rockets leading up to the massive Saturn V, but I also knew about other technologies being investigated like nuclear rockets and ion engines. Both were the stuff of science fiction, and in fact I read science fiction stories that were based upon these futuristic technologies. But I bided my time and dreamed that in a few decades after Apollo, we would be traveling to the asteroid belt and beyond on day trips with these exotic rocket engines pushing us along. 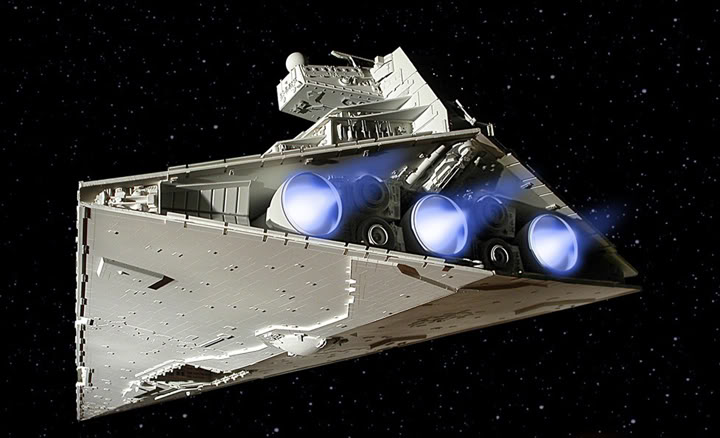 Well…I am not writing this blog from a passenger ship orbiting Saturn, but the modern-day reality 50 years later is still pretty exciting. Nuclear rockets have been tested and found workable but too risky and heavy to launch.  Ion engines, however, have definitely come into their own!

Most geosynchronous satellites use small ‘stationkeeping’ ion thrusters to keep them in their proper orbit slots, and NASA has sent several spacecraft like Deep Space-1, Dawn powered by ion engines to rendezvous with asteroids. Japan’s Hayabusha spacecraft also used ion engines as did ESA’s Beppi-Colombo and the LISA Pathfinder. These engines eject charged, xenon atoms ( ions) to speeds as high as 200,000 mph (90 km/sec), but the thrust is so low it takes a long time for spacecraft to build up to kilometer/sec speeds. The Dawn spacecraft, for example, took 2000 days to get to 10 km/sec although it only used a few hundred pounds of xenon! 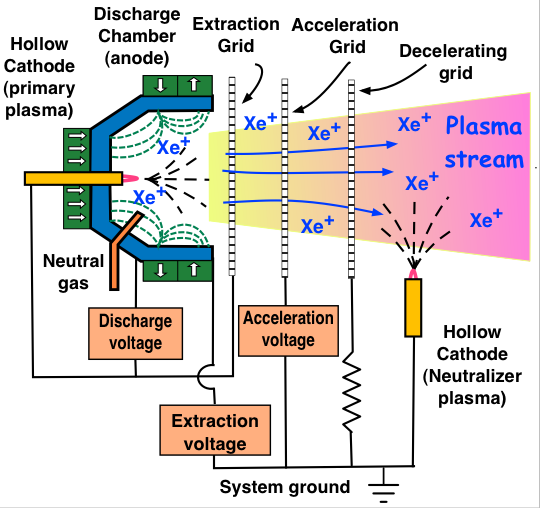 But on the drawing boards even more powerful engines are being developed. Although chemical rockets can produce millions of pounds of thrust for a few minutes at a time, ion engines produce thrusts measured in ounces for thousands of days at a time. In space, a little goes a long way. Let’s do the math!

The Deep Space I engines use 2,300 watts of electrical energy, and produced F= 92 milliNewtons of thrust, which is only 1/3 of an ounce! The spacecraft has a mass of m= 486 kg, so from Newton’s famous ‘F=ma’  we get an acceleration of a= 0.2 millimeters/sec/sec. It takes about 60 days to get to 1 kilometer/sec speeds. The Dawn mission, launched in 2007 has now visited asteroid Vesta (2011) and dwarf planet Ceres (2015) using a 10 kilowatt ion engine system with 937 pounds of xenon, and achieved a record-breaking speed change of 10 kilometers/sec, some 2.5 times greater than the Deep Space-1 spacecraft.

The thing that limits the thrust of the xenon-based ion engines is the electrical energy available. Currently, kilowatt engines are the rage because spacecraft can only use small solar panels to generate the electricity. But NASA is not standing still on this.

The NEXIS ion engine was developed by NASA’s  Jet Propulsion Laboratory, and this photograph was taken when the engine’s power consumption was 27 kW, with a thrust of 0.5 Newtons (about 2 ounces).

An extensive research study on the design of megawatt ion engines by the late David Fearn was presented at the Space Power Symposium of the 56th International Astronautical Congress in 2005. The conclusion was that these megawatt ion engines pose no particular design challenges and can achieve exhaust speeds that exceed 10 km/second. Among the largest ion engines that have actually been tested so far is a 5 megawatt engine developed in 1984 by the Culham Laboratory. With a beam energy of 80 kV, the exhaust speed is a whopping  4000 km/second, and the thrust was 2.4 Newtons (0.5 pounds).

All we have to do is come up with efficient means of generating megawatts of power to get at truly enormous exhaust speeds. Currently the only ideas are high-efficiency solar panels and small fission reactors. If you use a small nuclear reactor that delivers 1 gigawatt of electricity, you can get thrusts as high as 500 Newtons (100 pounds). What this means is that a 1 ton spacecraft would accelerate at 0.5 meters/sec/sec and reach Mars in about a week!  Meanwhile, NASA plans to use some type of 200 kilowatt, ion engine design with solar panels to transport cargo and humans to Mars in the 2030s. Test runs will also be carried out with the Asteroid Redirect Mission ca 2021 also using a smaller 50 kilowatt solar-electric design.

Check back here on Wednesday, January 11 for the next installment!

7 thoughts on “Space Travel via Ions”